The Georgia Department of Education English Language Arts division has its very own Twitter account and has been hosting a weekly series this academic school year of “Twitter takeovers” from different schools and educators around the state to showcase and highlight best practices in English Language Arts instruction across K-12.   In late October, I saw several awesome ideas from the Language Arts teachers at North Atlanta High.  Two tweets on graphic essays featuring the work of Casey Christenson immediately got my attention:

I was so excited and impressed by this idea that I emailed Ms. Christenson, and she graciously responded by sharing her handouts and resources with me.  I took her ideas and materials and modified them for them my students by crafting a graphic essay assignment for my 11th ELA Honors students; I used this idea for students to share their interpretations and analysis of transcendentalist themes in excerpts of Walden by Henry David Thoreau that we were reading at the end of the first semester.  In my modified version of the assignment, I framed the content portion with the Schaffer two chunk method we had used in our regular literary essay writing because I knew my students would need some sort of conceptual structure to include textual evidence and an in-depth response/commentary on the textual evidence.

In addition to using the models from Twitter with my students, I created a “steps to success” handout to scaffold my students.

I provided copies of the text excerpts, colored pencils, Sharpies, colored markers, craft and regular scissors, tape and glue, and 11×14 pastel paper as well as plain and colored paper for students to use to craft their project.  Students had approximately two whole days (we are on a modified block, so each class session is 90 minutes) plus the weekend to complete their projects.  Below are some of the exemplary projects completed by students: 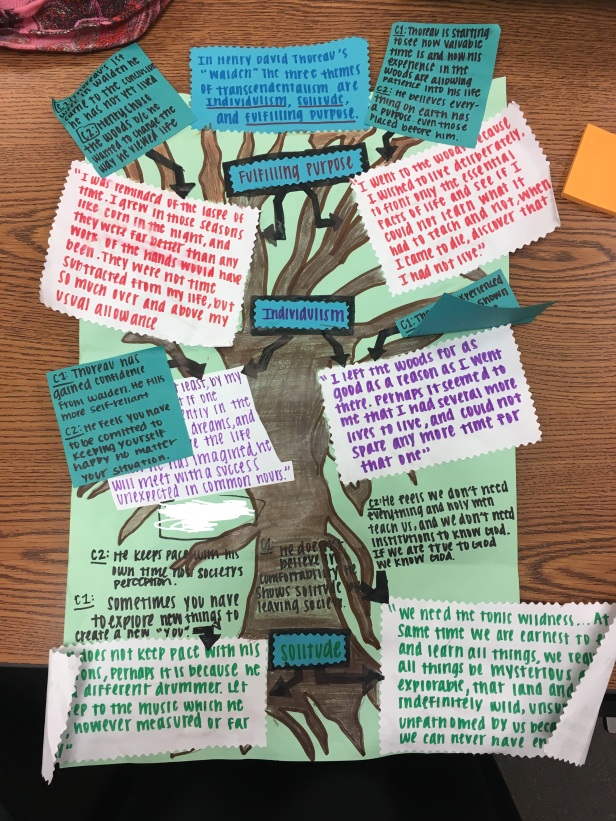 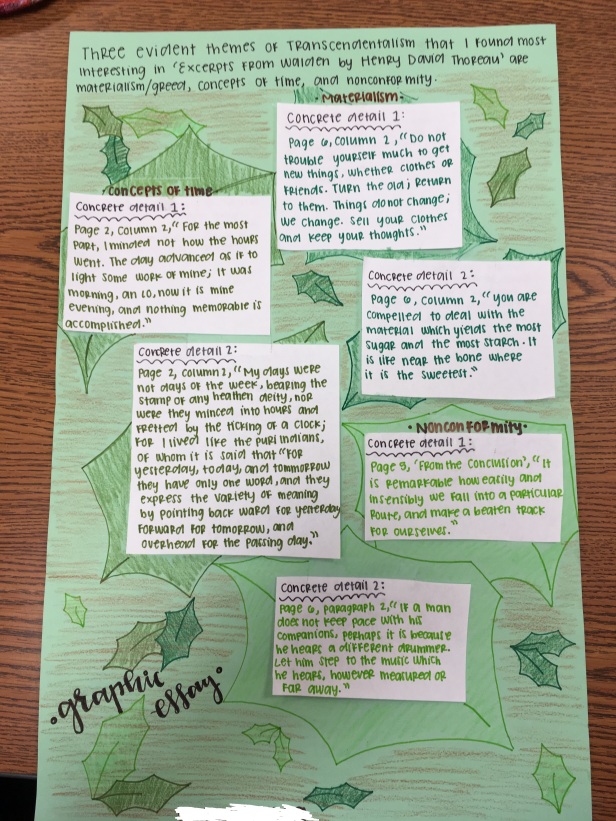 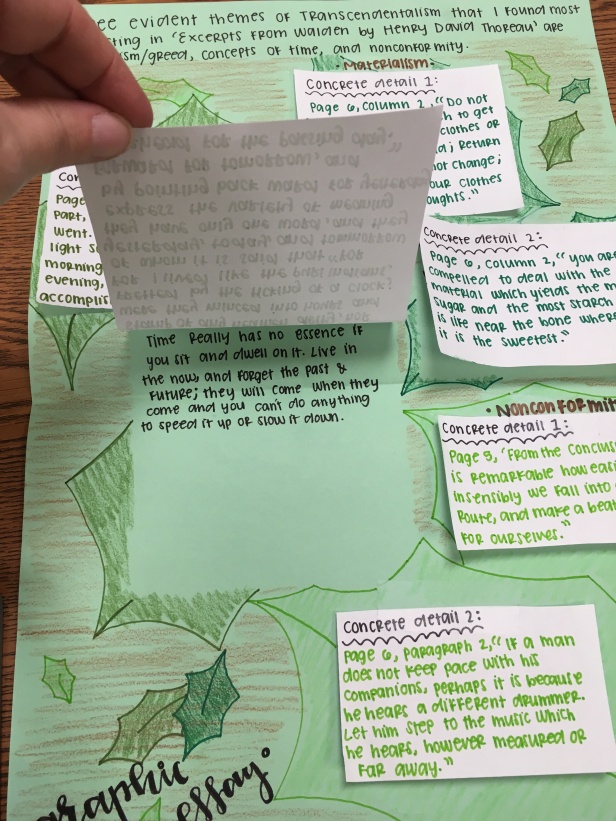 While some students expressed a bit of trepidation about the artistic component, most discovered they could create visually interesting anchor images and designs without having to be a gifted artist.  Overall, I think most students did a solid job on their work for their first effort and especially for it to be right at the end of the semester.  I was especially impressed with the way several students really became engaged with their work and dug into the text to think more deeply.  In addition, many students worked together and used each other as sounding boards for their design ideas or their thinking with their concrete details/textual evidence and commentary.  One of my classes in particular really stepped up with a “we can do it” mindset and level of effort I had not seen from them all year, so I am happy this mode of visual writing appealed to them.  The two areas where some students struggled:

Looking ahead, I am excited to pilot this writing option with my CP level students this semester; we used sketchnoting (a separate post is coming on that soon) as a stepping stone for them in place of the graphic essays in December, but I feel they are now ready to take on this next level of visual writing and thinking.  This option of a graphic essay will also be available to the Honors 11th ELA students in the new choice we are starting next week on Dickinson and Whitman.   In addition, graphic essays will be on our menu of products students can create to show their understandings of their choice/independent reading we’re beginning late next week, too!  Have you done graphic essays with your students?  If so, I’d love to hear from you!

This site uses Akismet to reduce spam. Learn how your comment data is processed.

About This Blog: Living in the Layers

For ten years, I blogged at The Unquiet Librarian about all things learning, libraries, and my return to the classroom in 2016-17.  This new blog is focused on literacy and Language Arts education, particularly writing instruction and inquiry driven work.  The blog title is inspired by Stanley Kunitz’s poem “The Layers”, a personal favorite and one that reflects my personal and professional journeys.

I am a writing and Language Arts teacher who loves learning, literacy, stories, learning, dogs, poetry, fabulous shoes, and good lip gloss. I began my career as a high school English teacher in 1992 and then became a high school librarian and 2011 Library Journal Mover and Shaker before returning to the classroom in August 2016.